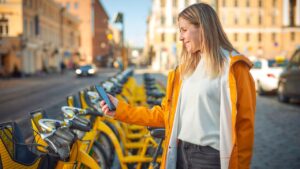 City dwellers are used to switching between apps to decide the best way to get from A to B. Is it quickest to get the train or the bus? What about a taxi or a city bike? Which provider has the nearest e-scooter?

It can be inconvenient and time consuming. Which is why Finnish startup MaaS Global decided to aggregate all these services into one app called Whim. Available in more than 10 cities across Europe and Asia, users can access taxis, buses, bikes, e-scooters and rental cars.

According to the International Energy Agency, transport is responsible for 24% of global energy-related CO2 emissions, most of which come from passenger vehicles. If Whim can persuade users to trade their car keys for a single app offering multiple transport options, the environmental impact could be enormous, says Hietanen.
Car competition

He admits this isn’t an easy task. To succeed Whim has to be more convenient and cheaper than owning a car. “The car represents freedom of mobility,” says Hietanen — even if a city dweller barely uses it, they still keep it parked outside as a “freedom insurance.”

Users can choose between multiple tiers of service, including a pay-as-you-go option and a 30-day season ticket, which costs €62 ($73) in Helsinki — where the app is most established — for unlimited public transport and short taxi rides. The ticket also offers car rental from €55 ($65) per day.

While Helsinki has well-developed alternatives to driving, that’s not true of everywhere. If a city “does not have a wide public transport system or a lot of rental cars or taxis in place” then it will be difficult to convince people to give up their cars, says Maria Kamargianni, associate professor of transport and energy at University College London.

She says apps like Whim represent the first step in tempting people away from car ownership, and adds that the availability of alternative transport options is likely to improve as the market matures. Research firm MarketsandMarkets predicts the global mobility service market will grow from $4.7 billion in 2020 to $70.4 billion by 2030.
MaaS movement

Whim, launched in 2016, is one of the earliest providers and has raised more than $60 million from investors such as BP (BP), Mitsubishi (MBFJF) and Toyota Financial Services. It’s available in several European cities and in Tokyo, and has racked up 18 million trips globally since launch.

“We’ve known from the beginning that the investment needed to create this would be substantial,” he says, adding that the company has recently secured further investment.
Greener travel

Though the industry is in its infancy, Hietanen is confident the demand will be there. A recent report from the International Transport Forum (ITF) says that mobility services will be vital in meeting the needs of a growing world population and fast-paced urbanization. But for growth to happen, “people must choose it over other travel options” such as private motor vehicles.

This is already happening, says Hietanen. According to a company survey carried out in Helsinki, 12% of its users said that Whim had prompted them to give up their cars. “People want the more sustainable solution,” he says, “but they still want the freedom of being able to go anywhere, anytime.”